A Full Review Of The New Film Instant Family 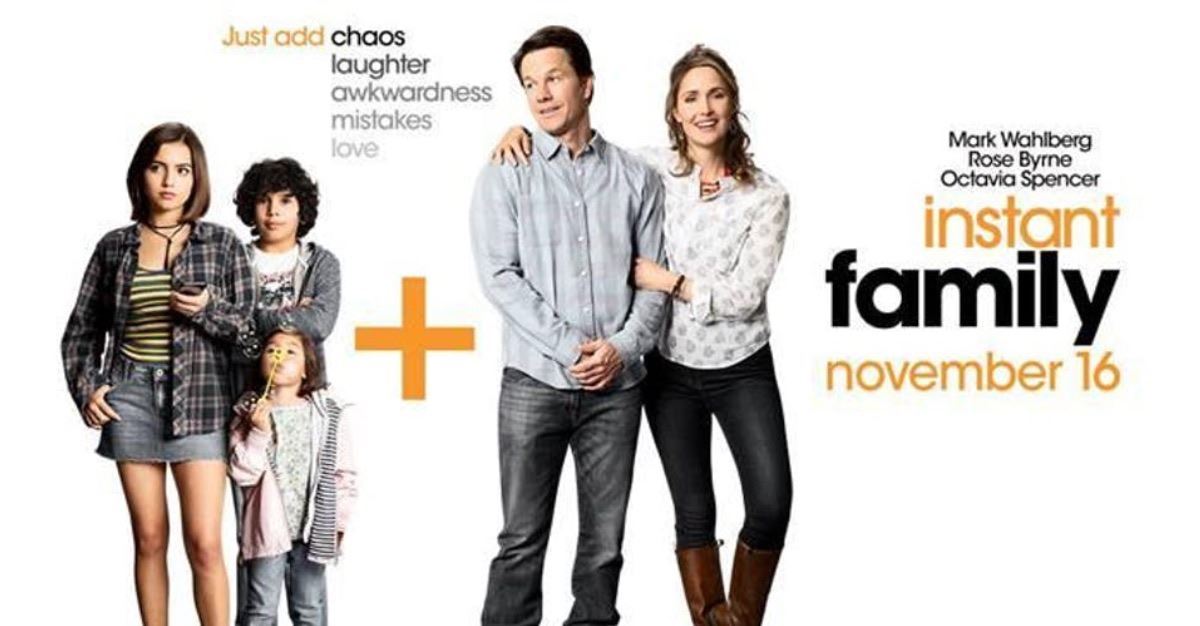 Paramount Pictures has finally released the brand new film Instant Family, into theaters nationwide, and I had the chance to pre-screen it just before it debuted. In this post, I provide my full perspective on the film.

I’ve never really been a big fan of adoption or foster care-related movies. Mostly because they often miss the mark in portraying the honest and raw emotions that come from this journey (and you know how much we love honesty..:-) ). There have been a few exceptions to this. Who can forget the moment that Leigh Anne made Sean stop the car in The Blind Side when they saw Big Mike walking alone in the cold and then invited him home with them? Tears every time I watch that scene! And the moment when Annie’s supposed birth parents show up to Mr. Stack’s apartment to pick her up is heart-wrenching in the 2014 Annie remake.

But there’s a lack of real on the big screen with many traditional adoption and foster-themed movies. Not only do they miss the mark on the process, but often paint a much rosier picture of foster care and adoption than really exists. And I’m not saying that in relation to the children we care for. I’m saying this in relation to the journey, the process, the ups and downs of a broken system, and more. There’s frustration, deep loss and heartbreak almost throughout. There’s trying to understand past trauma, and there’s certainly grief that our kiddos experience.

You just can’t capture the realness of this journey in a 2-hour film. Or can you?

To be quite honest here, when I started Instant Family last week, I went in with my guard up. I didn’t want to see another film that provided a sorta-kinda accurate perspective on foster care and adoption. I didn’t want to find myself rolling my eyes, or shaking my head and saying “Nope, that’s not right,” under my breath. I’ve had enough. No one has really captured the true accuracy to-date. Much like I felt several years ago with some of the Bible-story-themed films and television series. Can we just….not….anymore?

But 10 minutes into Instant Family I was in tears. I was also laughing…a lot. And more than that….I was hooked! I had this feeling in my gut, even early on: this film was going to do it. They were going to capture that raw honesty that has really never before been captured in modern cinematography. I have to say…I LOVE this movie. I really do. I do have some strong cautions (which I’ll share a little later) but for now…here are my thoughts on Instant Family by the grade…

A Few Cautions Before You See The Movie…

There is strong language throughout the film (which I don’t mind, but you might if you’re taking young children to see this), as well as moderately unnecessary sexual references. I say moderately because this is also a portrayal of real life, so the lingo used would be accurate (and honestly, not uncommon around our household if I’m honest here!). In terms of taking children to see this, I would not recommend taking any who are still in foster care, children not that far removed from their adoption day, or children you think could be triggered by storylines of loss, trauma, or grief. There are too many moments that could become triggers. And since we are already at the cusp of the Holiday season at the time this post is written, any opportunity you have to reduce triggers would be advised.

One scene that I did not find very humorous, nor did I think had to play out the way it did, happened toward the end of the film, where Ellie and Pete track down the school’s 22-year old janitor who had been texting lewd pictures to Lizzy. Realistically speaking parents would not walk through the halls of the high school, looking for this person, nor beat him up the way they did (of course, any of us could understand why they did so). Accurately, we would do the responsible thing and call the police and school officials. Furthermore, when Pete and Ellie are arrested for the assault of the janitor (at the same time he’s arrested for sending inappropriate sexual content), Lita and Juan, who were waiting in the care to be driven to school when Pete and Ellie charged into Lizzy’s school, are placed in temporary care while they wait to post bail. The children then return to their care. This would likely not happen in real life. You do not mess with the foster care system. In real life, Juan and Lita (and Lizzy) likely would have never returned to Pete and Ellie’s care, and their license would have been suspended or revoked. This is one storyline in the film that could have been modified drastically, and still driven home a powerful point.

That one scene being the exception, I thoroughly loved this film and would highly recommend it to foster and adoptive parents. I thought it was delivered with accuracy, honesty, and a vulnerability that will encourage and move parents.

Did you see Instant Family? What did you think? Share your thoughts with us in the comment section below.