20 Reasons Why My 4-Year Old’s Feelings Are Hurt! 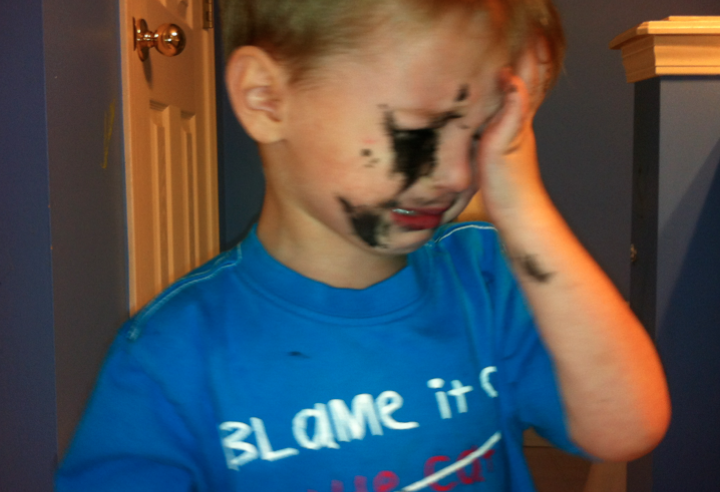 My 4-year old son Sam gets his feelings hurt really easy. And when I say easy, I mean easy! If you look at him the wrong way, or say something he doesn't like, his runs into the other room and collapses in a heap of emotion. As any good parent (especially one who is a blogger) would do, I take notes, and methodically plan out a future post, while his mother takes pictures!

After a year of careful research and study (okay, not really), not to mention outbursts of laughter (and some compassion too), I present to you the 20 reasons why my 4-year old’s feelings are hurt:

#20… He was told to put his shoes and coat on for the 5th time so we could leave for dinner! (Each time, he was asked politely)

#19… He was warned that if he put mascara in his eyes it would burn!

#18… His brother told him to stop touching him!

#16… He got up from his place at the table and went out to the backyard to play and the table was cleared!

#15… He was told to wash his hands before eating a snack!

#13… His sister looked at him the wrong way!

#12… He was caught putting his mom’s mascara all over his face while he was supposed to be taking a nap!

#11… He was warned, while at the beach in Florida, that the waves were pretty big and could knock him over, so it was important for him to stay back!

#10… His older brother’s bike was too big for him to ride!

#9… It was morning and he didn’t want to be awake, but he woke up and came downstairs on his own accord!

#8… All of the Christmas presents were not for him!

#7… He finished all of his fries and we couldn’t magically produce any more out of thin air!

#5… It was 20 degrees outside and we told him to go back upstairs and get warmer clothes!

#4… The episode of Spongebob Squarepants ended and we turned the station!

#3… We had to wash his Beeko (aka- blanket) because it had developed a crusty substance all over it!

#1… His mom picked up another child, who was younger than him, and he demanded that he was “always the baby!”

Have any reasons why your 4-year old (or any other age, for that matter) has gotten their feelings hurt lately?