“His Truth Is Marching On!” A Multi-Racial Family’s Take On The Movie ‘Selma.’ 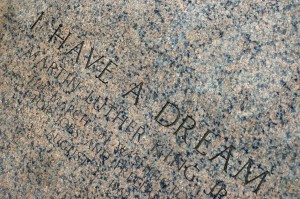 This past week I (Mike) had the opportunity to see a pre-screening of the new movie Selma, which debuted in theaters across the U.S. yesterday. The film was overwhelming on many levels. I knew my heart would be moved. I just had no idea to what degree!

Let me begin by sharing a little background on me, in case this is your first time visiting Confessions Of A Parent. I’m an adoptive father of 8 amazing children. Three of our children are African-American. We adopted all of our children from the Indianapolis, IN area. I love each of my kids deeply, and we love our family’s diversity. In fact, we love it so much that we really don’t notice our differences. The way we see it, we’re…us.

That’s probably why I was hesitant, at first, to see Selma. I knew the backstory, and the overall plot. I knew the film would incite emotions that would be difficult for me. I struggle with anything that illustrates barriers or divisions. My greater hesitation, however, was watching a film depicting human beings, brothers and sisters of mine, creations of the same God who created me, being brutalized out of ignorance and hatred. As I drove to the theater, stood in line, and eventually took my seat, all I could picture were my 3 children who’s only difference from me is the color of their skin. My heart wrenched in my chest. I couldn’t take seeing them hurt, ever!

In case you need a brush up on history, the film depicts one of the most brutal battles Martin Luther King Jr. fought, during the Civil Right’s Movement, to allow African-American people the right to vote. It primarily focuses around the few months he spent in Selma, Alabama in 1965, where an historic freedom march was organized from Selma to Montgomery. That march, and events surrounding it, prompted President Lyndon B. Johnson to sign into effect the Voting Rights Act, allowing African-American people the right to vote.

The previews rolled, lights dimmed, and I clutched the arms of my seat. For a little more than 2 hours, I was overwhelmed by the power and inspiration of Selma. While graphic at times (a little more on that in a minute), Selma hit the mark on so many levels. I personally walked away with some powerful reminders!

All creeds, races, ethnicities, and colors are one! That’s the way God sees it and that’s the way I see it. That night, the theater was filled with different races, creeds, socio-economic backgrounds, and religious affiliations. It was an amazing sight to see. We occupied seats as brothers and sisters, undivided. Without spoiling the film, there is also a powerful message of unity portrayed in several parts of the film. This was very inspiring!

History Is The Greatest Teacher.

I couldn’t help but celebrate how far we’ve come. Sure, we have quite a ways to travel but we’re growing. I hope this film can further inspire all human beings to live in unity. I felt excitement, walking out of the theater, as I thought about this new day we live in and the opportunities we have, regardless of race or background. History can teach us so much if we let it do so.

As the father of 2 African-American girls, I cannot begin to express how grateful I am for the cause that King stood for, but more important, would not stop fighting for! As I stood in the theater with my friend, after the movie’s end, we talked about how world-changing this movement was and the overwhelming good it did for humanity. I made the comment, “If it weren’t for his fight, I might not be the father of two of my daughters!” For that, I’m forever grateful.

My Recommendations Before You Take Your Kids To See Selma:

I highly recommend Selma. It is a very powerful, yet very appropriate film. Make sure your children have the right perspective going in, and that they are ready emotionally, and spiritually, to handle the tough things they will see and hear in the film. Be ready to discuss and dialogue the Civil Rights Movement and the equality that we share as human beings. After you see the film, shoot us a comment, Tweet, or Facebook post back and let us know what you thought (without spoilers :-)).

\Have you seen the movie. What were your thoughts? (Please DO NOT leave spoilers)