“I Am A Work In Progress” 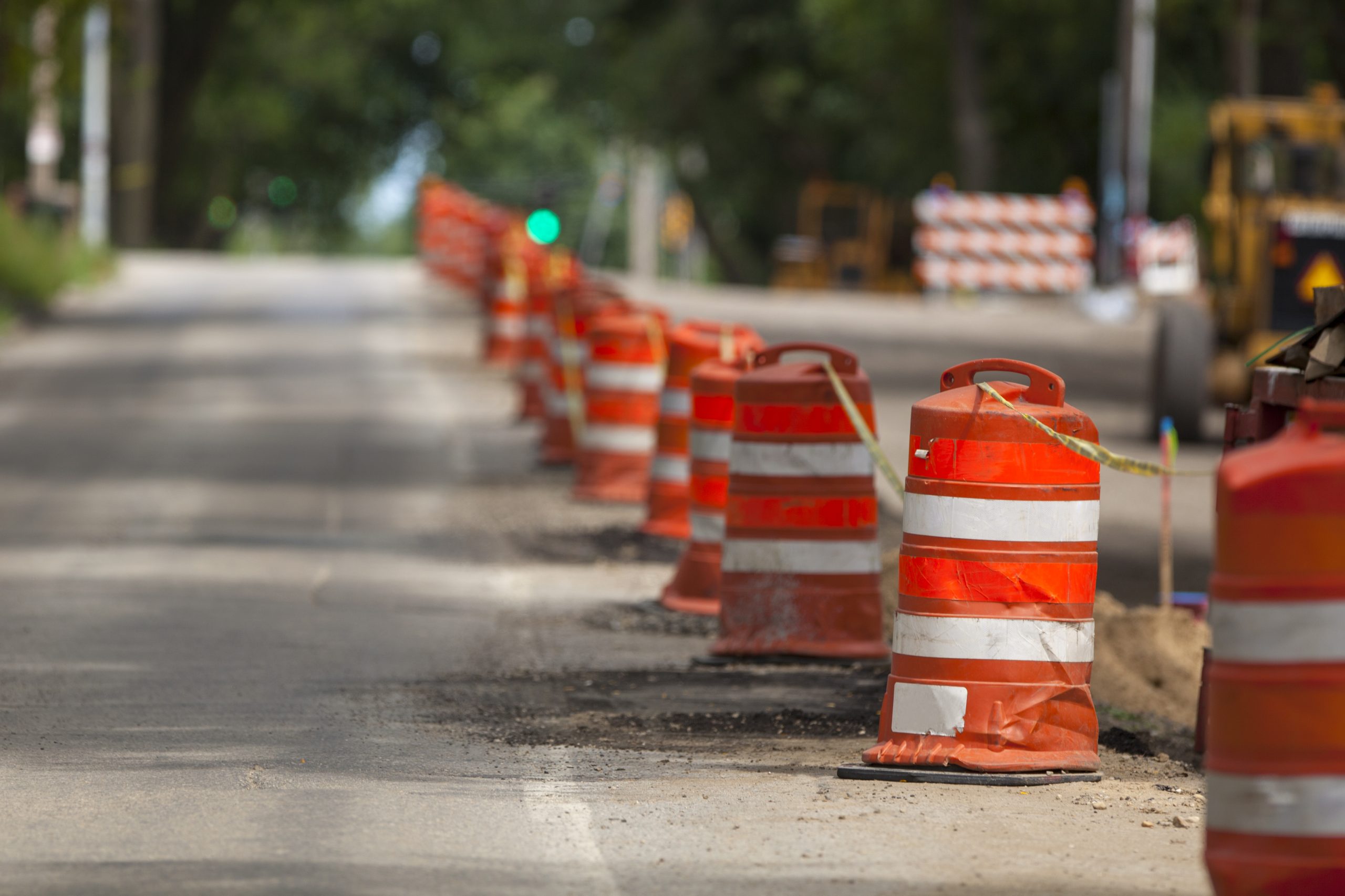 I saw it happen. Not live, but minutes after. I watched the full unedited version through an Instagram account I follow. The "Slap" seen around the world, on stage, at The Oscars. Maybe not the greatest night in television history but, now, certainly the most infamous.

I need to pause for a moment, and share a disclaimer. I’m not writing this post to drive a point home about who did what right, who was at fault, who was justified, why they were justified, what repercussions should take place, or to get into the weeds about anything that has transpired since this incident shocked the world (we’re all on Meme overload!).

After all, this is The Honestly Adoption blog. We’re not a blog about pop culture. The closest we’ve come to this is reviewing movies with adoption and foster care themes and overtones. That’s it. It’s not our niche. I leave pop culture reviewing, debating, and fodder to the pros who know how to muse and quip about that sort of thing.

I want to talk about Will Smith’s apology, which he issued via his Instagram and Facebook accounts on Monday. 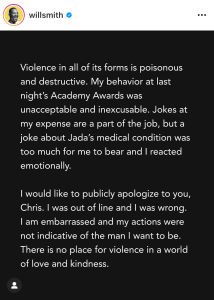 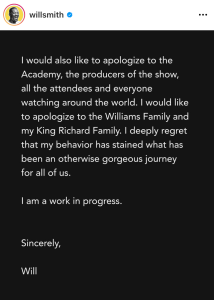 I read this on Monday night, while sitting with my oldest son at an NBA basketball game. It was way past my bedtime, the arena was dull and unexcited, and my eyes were heavy. I paused on Will Smith’s post, momentarily, as I mindlessly scrolled through social media. Our home team was losing badly and both my son and I had mentally checked out and begun to scroll. That’s what you do when you’re bored in 2022!

I read the apology. Suddenly, I felt a mental jolt as I read those last words: “I am a work in progress.”

Aren’t we all, I whispered.

All I could think was, how often have I failed in my life? As a person, as a friend, as a man, as a father, as a husband? How often have I allowed my emotions, my feelings, my fears, and my triggers to get the best of me? How often have I overreacted, snapped, hastily moved to judgement, or behaved in a way that was embarrassing, unbecoming, or unprofessional?

Too many times to recount.

Will Smith’s apology spoke volumes to me. If you know me, you know how big I am on taking ownership for one’s actions. We all fail, miserably sometimes. It’s about how we own our actions and work to make things right. That is of utmost importance.

How often have we allowed our emotions as caregivers to get the best of us, and overreacted or said something (or did something) we did not mean, to then feel crushing guilt and shame afterward? How often have we witnessed our children melt down, function from their basement brain, and act impulsively, only to later feel remorse and shame upon returning to their re-regulated state?

Yes, we, are all a work in progress.

I read a piece published by Inc. on Smith’s apology. The writer points out that “What Smith experienced wasn’t just a poor lapse in judgment. It was an example of what psychologists refer to as an emotional hijack, or an amygdala hijack. When it comes to higher level executive functions, such as the capacity to think through a decision or exercise self-control, we typically engage the frontal lobe(s), the largest part of the brain. But when we feel some type of emotional threat, the amygdala, an almond shaped structure found deep in the brain, hijacks the process. This often results in a fight, flight, or freeze response.” (Inc.com feature on Will Smith and Chris Rock)

Total, 100% identification. For myself first and foremost, but also the journey of parenting children with a trauma history.

Will Smith’s apology means a lot to me as a human being. He owned it. He didn’t make excuses or shift blame. He told the truth and he took ownership. That’s what a work in progress does. Fail, yes. We all do, and we all will. But choose to fail forward.

I am a work in progress.