The Big Ways That Teenagers Are Changing The World! (MOVE Part 2) 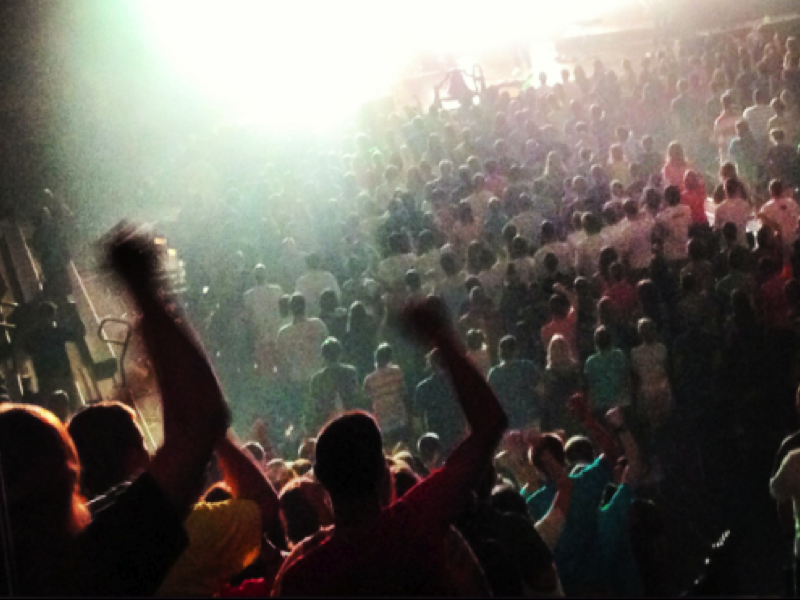 There has never been a generation of young people with more promise than this current generation. Combine the resources, platforms, and creativity they have, with their passion and big dreams, and you have a recipe for MONUMENTAL world change! We’re talking full-on Kingdom Impact.

In 18 years of working with students, this has been one of the most powerful weeks of movement, intentionality and vision for world-impact, that I have ever seen designed for teenagers. Again, if I could find a way to bottle up the sites, sounds and moments to share with you, I would, no question! But word and picture will have to suffice.

If you did not join me for MOVE Part 1 on Wednesday, I’ll recap what I’ve been a part of real quick. Since Monday I have been in Holland, Michigan at Hope College for MOVE 2013. This is a Kingdom-focused high school student event produced by Christ In Youth. It has exceeded my expectations as a leader of students, and a leader within the church, big time!

As I sit in the quiet room I am writing this post in right now, I can’t help but reflect on some of the huge ways teenagers are changing the world right now, as we speak. Not just here at MOVE but all over the globe. I believe in teenagers. I believe in their hearts and their gifts and their talents. I believe that God can and will use every single one of them, if they choose to let Him, for His amazing Kingdom.

I could write 40,000 words worth of stories of how I’ve seen this play out over the years, but that would be a book and not a blog post. I’ll cap it at 5. So, here are 5 big ways I believe teenagers ARE changing the world:

This generation of students is demonstrating something that we adults could learn a lesson or 2 from: the ability to love everyone regardless of their race, belief-system, ethnicity, creed, or family background. I have been amazed at their “everybody matters” approach to the world. It’s not always perfect, but then again, they are human just like everyone else. However, in so many powerful ways, they are modeling what the Bible calls us to do- “Love others sincerely!” They are not following a “how-to” on loving. It’s unscripted and spirit-led. It comes from their hearts.

Need something done and done fast? Ask a teenager. The stigma might still float around that teenagers are lazy and uncaring but I haven’t seen much of it lately. I know tons of students who have fallen in love with serving one another and doing so in love. What makes this so exciting is that they are choosing to serve people who are in need with passion and authenticity, from their hearts, and not because they are being forced too.

Last night our students had the opportunity, along with all the others here, to write down their forgiveness stories (either how, or who, they need to forgive, or how they need to accept forgiveness) on rolls of toilet paper. Then, they assembled around the “Forgiving Tree” on Hope’s campus and threw their roll into it, symbolizing a new start. It was powerful, tearful, but most importantly- life-changing for many of our students. This same uprising is happening all over the globe. Teenagers are learning the power of forgiveness and it is turning their world and the world of others upside down. There is no greater life-changing moment than when someone is forgiven and set free from their mistakes, or chooses to set others free from the mistakes they committed.

I love the precious hearts of our kids. I love how willing they are to give their hearts and forgiveness to people who have wronged them or hurt them. It’s humbling and inspiring.

The question asked of them this morning was this: “Do you want to be a legend, or do you want to leave a legacy?” Legends have followers, legacy-leavers use the gifts they’ve been given to change lives. As I think about the students that I personally have the great honor of leading, I believe I am a first-row witness to human-beings committed to leaving a legacy. It is overwhelming to think about the hundreds of thousands of lives who will someday be impacted by a legacy left by a student who attended a MOVE conference a century before. Wow!

Bottom line, that’s what this week has been about! And it’s not necessarily the big things that count. It’s the small and mid-sized acts of love and service that are moving this great Kingdom forward. It’s choosing to serve children through a small group in their children’s ministry department, or helping an elderly neighbor with household chores.

Perhaps it’s even something as unknown and unrecognized as collecting can-goods for an area food pantry. But, it’s world-changing. And there is an army of students ready to take this world by storm in the name of Jesus!

If you are a parent of a teenager, or you work with teenagers on a regular basis, don’t miss how BIG these 5 things are. This is happening with your student. They need us, the adults in their lives, to believe in them and pour into them. They are the generation now but also the generation tomorrow. This world will change because of them.

Certainly, there are many more ways teenagers are changing the world than just these 5, so I would love to hear from you:

What are some other ways you’ve seen the teenagers in your life working to change the world? Leave a comment in the comment section of this post!