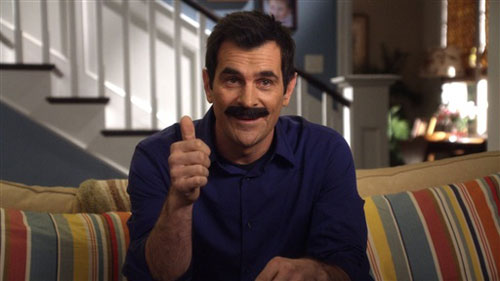 "I'm a cool dad. That's my thang! I'm hip, I surf the web, I text." "Trust me, I had plenty of fun in my time. Then I met your mom." "A realtor's just a ninja in a blazer. The average burglar breaks in and leaves clues everywhere. But not me. I'm completely clueless!"

I love Phil Dunphy from ABC’s Modern Family. He’s hilarious and the show has become a household favorite for our family. Most of the time, our entire family can watch it together and get a good laugh. As a writer, I personally marvel at the brilliant writing and in-touch scenarios that families can relate to (and laugh at!). I once heard Steve Levitan, co-creator of the show, interviewed, and he said they use many personal situations and humorous moments from their own families to write many of the episodes. Personal touch- classy!

A few months ago, as my wife and I watched the latest episode, the thought occurred to me- “Phil Dunphy is a good dad!”

Yes, I know he’s a fictitious character, and I know all of his lines are scripted and delivered on cue (so eloquently by actor Ty Burrell), and I know the show is make-believe, but think about it: under the silly banter and ding-dong antics, he loves his kids, loves his wife, and is a genuinely good husband and father.

Because Modern Family is one of my favorite shows on television, and because I love parenting, I’ve come up with the Phil Dunphy Rules of Fatherhood, based on the good dad that I believe he is. Here they are-

Rule #1- “Work hard, but don’t put work before your children.”

In many episodes you see Phil heading off to a showing, or an open house, carrying real estate signs, and putting forth lots of effort for his job as a real estate agent. But, you never see him neglecting his children for his work. He’s clearly a hard worker but he’s not a work-a-holic. There’s never been an episode where Phil is glued to a laptop while his kids look on, or skipping one of their activities to meet with a client.

Rule #2- “Be involved in your children’s life.”

Phil is always at his kid’s performances or activities, dawning a camcorder and applauding. He knows their friends and tries, even in vain at times, to stay connected to the happenings in their lives. He’s clueless but still dialed into them. In the words of Phil-

“I’ve always said that if my son thinks of me as one of his idiot friends, I’ve succeeded as a dad.”

Rule #3- “Love your wife openly in front of your children.”

I don’t suppose I have to bring up Clive Bixby under this one, do I? Juliana? Okay, I’ll stop (but those episodes are absolutely hysterical!) On a slightly more serious note- Phil does openly love Claire unashamedly in front of Haley, Alex and Luke.

Rule #4- “Go to any measure necessary to care for your children.”

Ever seen the episode where Phil wants to chase down Haley’s 30-year old boyfriend and pull Haley away from him? Unbeknownst to Phil and Claire, Haley persists to try and get their attention. Phil wants to hunt the guy down but Claire keeps stopping him, insisting that Haley will come around when she sees that they’re “okay” with all of it. The episode ends with Phil declaring that Haley is his little girl and he needs to stop her from making a huge mistake. Haley overhears all of it. We don’t usually tear up at Modern Family but this episode got us both!

Rule #5- “Value family above anything else.”

“I’ve got Gloria!” Phil can usually be heard saying this when there’s a crisis. Okay, actually, there are several other instances where Phil is working hard to have family time. The episode where they are at the ranch is one of my favorites. And, the shotgun Christmas party is also great. It reminds us that family is the most important thing!

Any fans of the show? Any other rules you would add to these 5? Of course, it’s completely acceptable (and gladly welcomed) to just leave a comment with your favorite quote or Modern Family moment!